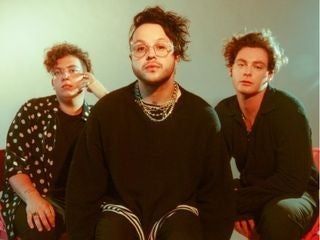 Sir Sly is an American indie pop band formed and based in Los Angeles, California. The band is fronted by vocalist Landon Jacobs with instrumentalists Jason Suwito and Hayden Coplen accompanying him. While they originally operated anonymously, the trio gradually built a steady following and managed to top The Hype Machine chart, eventually revealing their identities.Their debut single, "Ghost", was released on March 4, 2013, on the National Anthem and Neon Gold labels followed by the single "Gold" on May 21, 2013. "Gold" peaked at No. 30 on the Billboard Alternative Songs chart and No. 45 on the Rock Airplay chart. "Gold" is also featured in the video game, MLB 14: The Show.

Cannons issued their first EP Up All Night in 2014. The band then released their debut album Night Drive in 2017, as well as a second EP, In a Heartbeat, the following year. Shadows, Cannons' second album, was released in 2019. "Fire for You", the first single from Shadows, gained significant commercial traction after being featured in a 2020 episode of the comedy-drama TV series Never Have I Ever. The band subsequently signed to Columbia Records. In early 2021, "Fire for You" reached number one on the Billboard Alternative Airplay chart.