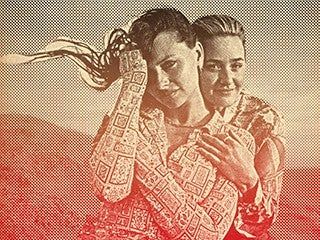 Aly & AJ are an American pop duo that consists of sisters Alyson and Amanda Michalka. They signed a recording contract with Hollywood Records in 2004. Their debut album, Into the Rush, debuted at number 36 on the US Billboard 200, and was later certified gold by the Recording Industry Association of America (RIAA). It has sold 839,000 copies domestically and one million copies worldwide. Their third album, Insomniatic, peaked at number 15 on the Billboard 200, selling over 39,000 copies in its first week and becoming Aly & AJ's highest debut to date.

In 2009, Aly & AJ renamed themselves 78violet (pronounced "seventy-eight violet") and announced their departure from Hollywood Records the following year. In 2013, the sisters released their first single in five years, "Hothouse". The duo had planned to release a full-length album in 2014, which was later leaked onto the internet. On December 9, 2015, the duo announced they had decided to return to their original name, Aly & AJ. In 2017, they released their debut EP Ten Years, which was followed by an EP titled Sanctuary in 2019. On May 7, 2021, they released their fourth studio album, which marks their first album in 14 years.