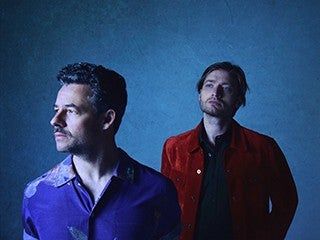 The Midnight is an American synthwave band originating from Los Angeles, CA, composed of producer Tim McEwan and vocalist/guitarist Tyler Lyle. The pair met for the first time in 2012 at a songwriter’s workshop in North Hollywood organized by Katie Donovan, Lyle’s A&R representative at the time. Despite differing musical backgrounds, they bonded over a mutual love of 80s rock and began to write songs together. After initially struggling to define their sound, McEwan suggested that they compose songs in the synthwave style. The first song they wrote together as a duo was WeMoveForward, which was included on their debut EP Days of Thunder. For most of their career, The Midnight has created a strong and distinct synthwave sound in their music - Tim McEwan once described the band's early albums “as if Miami Vice had a baby with a John Hughes movie”. Production and drums are handled by McEwan, with Lyle providing guitar, lyrics, and vocals. Most of the remaining instrumentation is digital, but on occasion songs (including most with saxophone and guitar solos) will at first have digital instruments that are then outsourced to other musicians to play live on the track. Thomas Edinger has been the primary saxophone player for The Midnight's releases, and McEwan's brother Oliver has frequently played bass for the band as well.